Why did you choose to study abroad in Japan? What made you choose Kobe in particular?

It started for me with my love of Japan’s anime culture. That’s how I became interested in Japan, and learned Japanese at university in China. At universities in China you can major in two things at once, so I studied Japanese and economics.
I also felt that I wanted to live overseas once in my life.
Actually, my parents were against the idea of me studying abroad, and I had to convince them, but I felt really strongly that I wanted to be in an unfamiliar environment, challenge myself to grow stronger, and be independent.
The biggest reason I chose to study in Kobe was because Kobe University is famous for its economics department.
Kobe has also historically been a port city, so it has a international atmosphere and is open to the world. I was attrached to the scenery, too, with both the ocean and the mountains. What are you studying at graduate school now?

I’m doing event analysis. In particular, I’m looking at the effects of Japan’s Trans-Pacific Partnership (TPP).
Economics uses a combination of the sciences and humanities, so it’s a really interesting major. It’s still a pretty young department, so it’s full of energy, and I think it has a lot of unique, attractive points.

What do you like most about life in Kobe/Japan?

I think the thing I like the most is sharing ideas with young Japanese people. When someone else brings out a good idea in a group, we’re able to discuss and share from there. At Kobe University, there are a lot of opportunities for researchers from across Japan to get together, and the 2019 Japanese Economic Association meeting was held at Kobe University. I participated in the event as a supporter, and it was a great experience.

Have you noticed any changes in your character or way of thinking since coming to study abroad in Kobe?

How do you spend your days off in Kobe?

Recently I’ve been really busy with my graduation thesis (laughs), but this weekend I’m planning to go club Mount Rokko. Other places I like are Harborland and Sannomiya.
I especially like the ambiance of the Starbucks in Harborland. 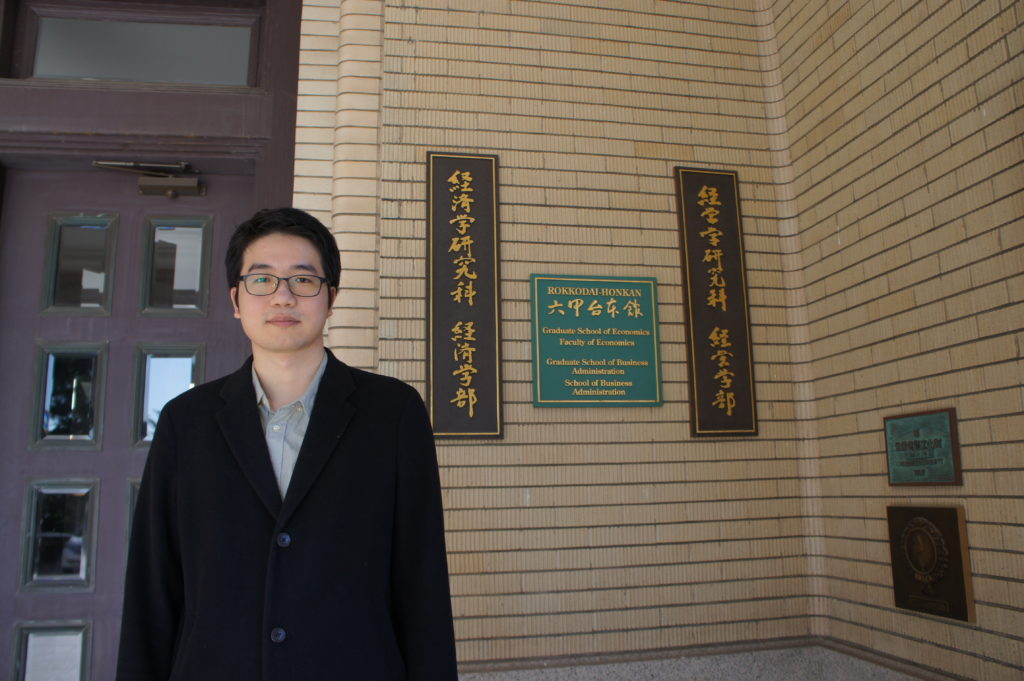 How do you plan to use what you’ve studied in Kobe?

I want to share all the good parts of my Japanese study abroad experience and help to clear up some of the lack of understanding between Japan and my own country. It’s my own personal experience, so I think I have a lot to say.
As far as work goes, I’m planning to get my PhD and become a researcher at a university.
A lot of the other international students from China are getting jobs at Japanese companies, too. Most of them in the IT industry. Some of them go to Tokyo, others remain in the Kansai area: they’re going to work in lots of places.
Japan and China are culturally similar, making it easy to live here, so a lot of people are able to live here for a long time.
On the other hand, getting a masters or doctorate degree from a famous Japanese university gives you an advantage in China, too, so some people go back to China as well.