Kobe City’s Trash Rules: There are a lot!

2021.03.31 LIFE
writer: Kobe Study Abroad Team
*This article was written according to trash rules accurate as of March, 2021. For the most up-to-date household trash rules in Kobe City, please see Kobe City’s website below.
“How to throw out household garbage”
https://www.city.kobe.lg.jp//a04164/kurashi/recycle/gomi/dashikata/shigen/index.html


What sorts of rules are there about how to throw away household waste in your country?
In Japan, trash may need to be separated, put out on different days according to the type of trash, and there may even be additional rules depending on the area where you live.

Today we’re going to be looking at Kobe City’s trash rules, and some of Kobe City’s Environment Department’s initiatives!

(1) How to separate trash (separating by category)
Trash needs to be sorted in order to dispose of it more efficiently, and in order to more effectively re-use materials and reduce waste. Trash is divided into 6 broad categories (cans/glass bottles/plastic PET bottles, plastic containers and packaging, large-size trash, non-burnable trash, aerosol and spray cans, and burnable trash). 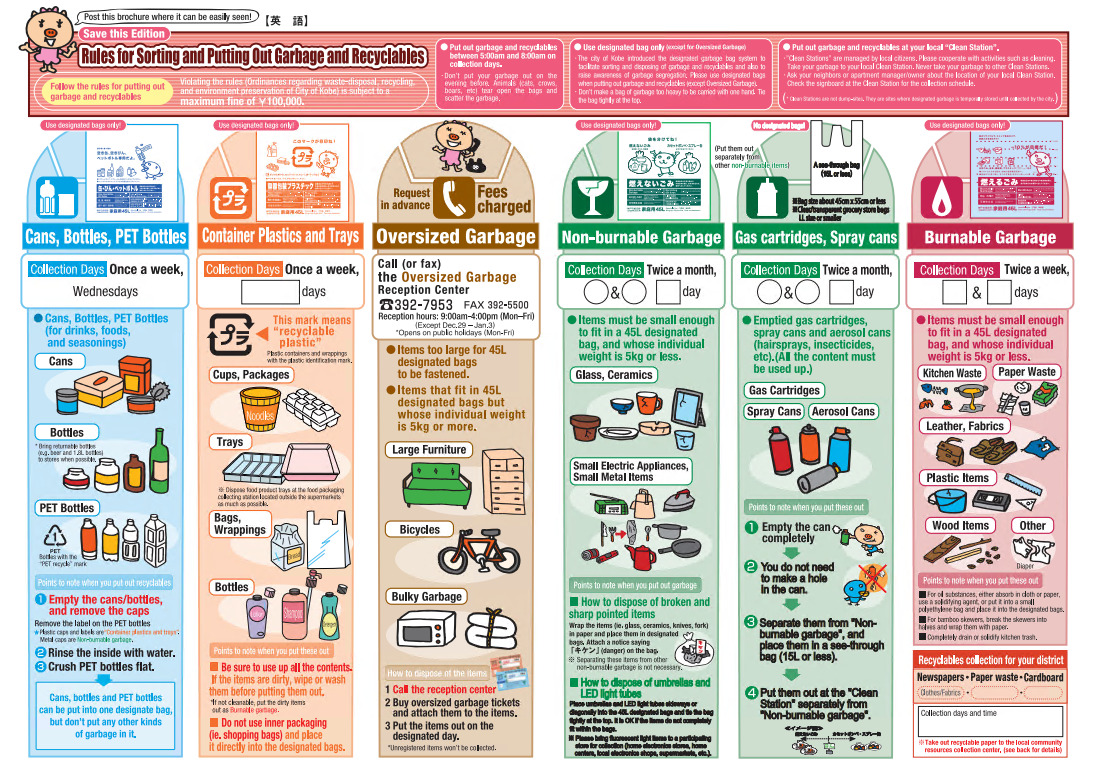 (2) How to throw trash away
●Put out your trash on the proper collection day
There are actually different, pre-determined days on which to throw away each of the types of trash in the 6 categories in (1). These also vary depending on the area where you live, so it’s important to check the trash days for your area.

●Put out your trash in designated bags (Excepting large-size trash items)
Please put burnable trash, non-burnable trash, cans/glass bottles/plastic PET bottles, and plastic containers and packaging in designated trash bags.
Put aerosol and spray cans in a see-through bag (up to 15 litres, may not be a designated trash bag) when you throw them away.
Please contact Kobe City Large-Size Trash Reception Center to dispose of large-size trash. (Tel: 078-392-7953, available languages: Japanese, English, Chinese, Korean, Vietnamese, Portuguese, Spanish, Thai)
Designated trash bags are sold at grocery stores, convenience stores, and home centers. (There are 3 sizes, in 45 liters, 30 liters, and 15 liters) Make your bags just heavy enough to carry one in each hand (about 5 kg), and firmly close the opening of the bag. 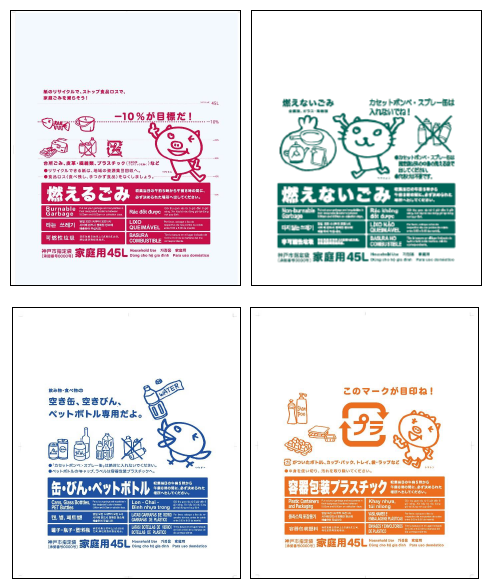 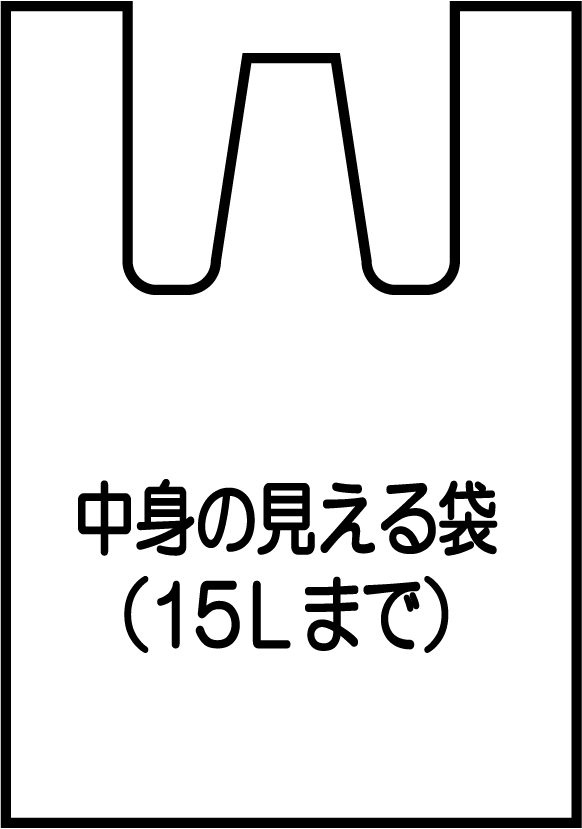 ●Throw these away at designated Green Stations (trash collecting locations)!
The Green Stations you can use are determined within the area [where you live]. Never throw away trash at other Green Stations! If you don’t know where your Green Station is, you can ask your neighbors or your building’s management company (owner), etc. Green Stations are managed by everyone in the area. Please help out with keeping them clean.

●Put out your trash in the morning between 5 a.m. and 8 a.m!
If you put out your trash the night before, cats, crows, or wild boars can rip the bags open and make a mess with the trash, so please throw away your trash at the appropriate time.


And there you have it! The basic rules.
Some of Japan’s trash rules might be a little unfamiliar to you, but you don’t follow them, not only will it be more difficult for you to throw away your trash, but it can make things difficult for your neighbors, too.
You may find them a little complicated, but getting used to them little by little is the important thing!

The app “5374 (gomi nashi) Kobe Edition” shows the trash collection days for your area, and how to separate trash. It’s also available in not only Japanese, but foreign languages, too (English, Chinese (Simplified), Korean, Vietnamese, Portuguese, and Spanish), so give it a spin!
Here is the URL: “5374 Kobe Edition (Trash Separation App)“
https://www.city.kobe.lg.jp/a04164/kurashi/recycle/gomi/dashikata/bunbetsukubun/apri/index.html

As a part of the Kobe City Environmental Department’s International City Beautification Project, Vietnamese students living in Kobe have worked together with Japanese students to create pamphlets about trash disposal rules (in two languages, Vietnamese and Japanese), in order to make these trash rules just a little bit easier to understand for those who are less familiar with them.
The information doesn’t include only trash rules, but also information based on a discussion of how trash is disposed of in both countries, as well as different cultural norms, so it’s very easy to understand. 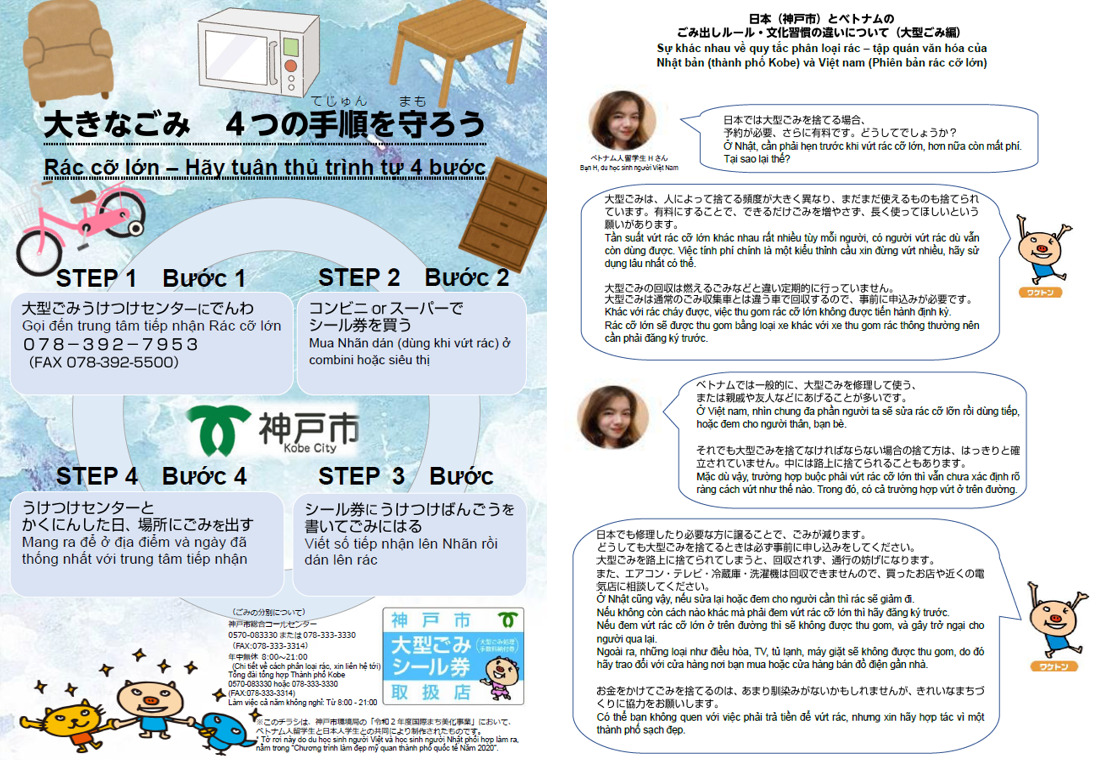 We think it’s wonderful that that international and Japanese students have worked together on this project about daily living! The international students who participated gave us comments like, “Even knowing that there were cultural differences between the two countries, I discovered a lot of the details about how they were different with this project.”

You may even make some discoveries by learning about the “trash rules” in a country different from your own. It’s the perfect chance to look them up!
Return to list